The University of Iowa College of Public Health seeks a dedicated and experienced leader for the Head of the Department of Health Management and Policy. The Department Head serves as the departmental executive officer and reports directly to the Dean of the College. 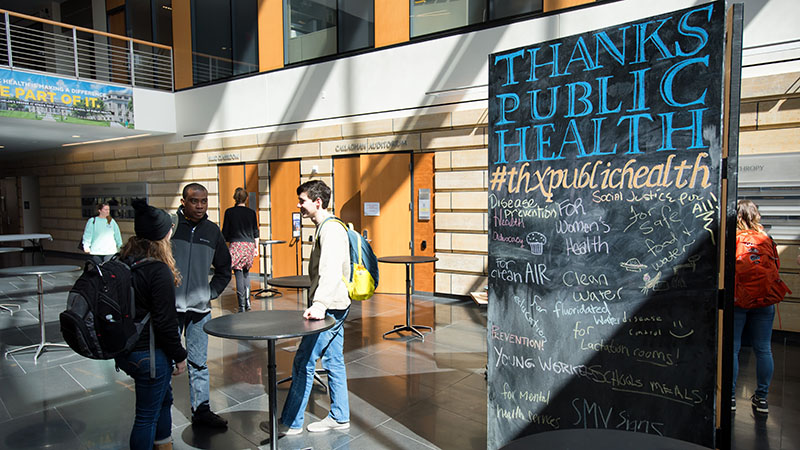 Details on candidates will be provided here prior to on-site interviews.

The University of Iowa, College of Public Health seeks a dedicated and experienced leader for the Head of the Department of Health Management and Policy (HMP). The Head will be appointed at the level of Professor with Tenure and will report to the Dean. The major responsibilities of the DEO include the following:

Candidates must have a PhD, DrPH, ScD, MD or equivalent degree in a related field and qualifications commensurate with an appointment as a tenured, full professor in our College of Public Health.  Current Associate Professors with the qualifications for appointment as a tenured, full professor will also be considered. Successful candidates must demonstrate academic experience in a health management and policy discipline with national reputation based on research and scholarship. Candidates must demonstrate leadership and administrative experience in advancing a vision of inclusiveness, collegiality, and scholarly relevancy in the field of health management and policy.  Candidates are expected to have a record of research productivity, including extramural funding, and high-quality teaching experience; evidence of collaborative efforts in the healthcare environment; evidence of success mentoring diverse faculty, staff, and students; and a commitment to promoting a diverse, equitable and inclusive academic environment. Desirable qualities of the successful candidate include demonstrated experience building relationships with academic, community and industry partners.

The College of Public Health is nationally ranked among the top 10 in publicly supported schools of public health and has a diverse research portfolio. The Department of Health Management and Policy is one of five academic units within the College and has 11 primary faculty and 54 adjunct faculty. Primary faculty serve as PIs on over $18 million in research grants and contracts. The department’s MHA program is ranked 8th nationally and its PhD program is ranked No. 13 among the 25 Best Health Management and Policy PhD Programs. Strong collaborations exist with non-government organizations and state agencies, University of Iowa Health Care and the Iowa City VA Health Care System, as well as with other colleges, departments, and centers throughout the University. The department’s PhD, MHA, EMHA and MPH in Policy programs have an excellent history of recruiting, training, and placing graduates. The department’s over 1,100 alumni work in a wide variety of healthcare settings, academic units, government, consulting, and professional organizations throughout the nation and internationally and provide significant financial, instructional, and advisory resources to the department. The College is in a beautiful state-of-the-art, LEED Platinum building. Iowa City http://www.thinkiowacity.org is one of the most livable cities in America with a moderate cost of living, nationally ranked public schools and healthcare facilities, numerous recreation and leisure options, and diverse cultural and employment opportunities.

Candidates will submit applications online at jobs@uiowa74077. Inquiries regarding the position can be made to Dr. Peter S. Thorne, the Search Committee Chair, at peter-thorne@uiowa.edu. Applications should include a letter outlining interest and relevant experience and curriculum vitae.

The University of Iowa is an equal employment opportunity / affirmative action employer. All qualified applicants are encouraged to apply and will receive consideration for employment free from discrimination on the basis of race, creed, color, national origin, age, sex, pregnancy, sexual orientation, gender identity, genetic information, religion, associational preference, status as a qualified individual with a disability, or status as a protected veteran. The University of Iowa is committed to recruiting and retaining the most talented and diverse faculty and staff, which involves providing opportunities for employees to “Build a Career | Build a Life.” For more information about local work / life resources, including dual-career support, please see:  http://worklife.uiowa.edu.

Candidates are invited to apply for the position directly by filling out an online application at the University of Iowa jobs website. All candidates will need to complete the application to be considered and are also required to submit the following materials online:

Founded in 1999, the College of Public Health is the newest collegiate unit at the University of Iowa, and the only accredited school of public health in the state of Iowa.

The college is home to nearly 80 full-time faculty, more than 400 graduate students, and a new and growing undergraduate degree program. The CPH is composed of five departments: biostatistics, community and behavioral health, epidemiology, health management and policy, and occupational and environmental health.

The college takes pride in its multidisciplinary, collaborative approach to addressing public health challenges and training the next generation of public health leaders, educators, and researchers.

The Department’s mission is to improve health and health services by preparing future leaders for, and advancing knowledge in, health management, policy, and research.

A Health Management and Policy student can pursue a Masters degree in Health Administration (MHA), an Executive Master of Health Administration (EMHA), a Masters degree in Public Health (MPH) with an emphasis in policy, or a Ph.D. in Health Services Research and Policy. Graduate education in health management and policy prepares individuals for careers in management, policy analysis and implementation, and research that focuses on the design, administration, management, and evaluation of health policies, programs, and services that are provided in a variety of settings:

As the health care system continues to grow and diversify, the demand for well-educated and highly skilled individuals will increase, and the challenges and opportunities associated with working in the health management and policy field will continue to provide a rewarding and stimulating professional life.

The college’s innovative community engagement activities reach people throughout all 99 of Iowa’s counties, across the United States, and around the globe. At the state level, programs help to monitor and prevent birth defects and cancers, train the local public health workforce in areas such as emergency preparedness and mandatory reporting requirements, engage local business leaders in community health initiatives, and assist elderly residents to maintain their independence.

Some examples of the College’s commitment to community engagement include:

The College of Public Health engages in innovative academic collaborations with units across the university, and partners at the state, national, and global levels to advance education, research, and public health policy.

The college believes that diversity in the classroom is a vital component of educating future public health professionals and scientists. A well-rounded, culturally competent public health workforce is required to meet the health needs of the nation’s growing ethnic and racial populations and to address the pressing health disparities faced by many groups. The college is committed to facilitating an atmosphere rich in cultural perspectives and actively supports and promotes diversity in the college and public health workforce.

Engaged and generous supporters have contributed to the success of the college’s philanthropy. At the conclusion of the University of Iowa’s recent For Iowa. Forever More campaign, more than 1,913 donors had contributed a total of $40 million to the College of Public Health, surpassing the $25.8 million goal.

The College of Public Health works closely with the UI Foundation to support advancement initiatives. The UI Foundation is the preferred channel for private contributions that benefit all areas of the UI, and its mission is to promote the UI’s commitment to excellence through engagement and philanthropy.

About the
University of Iowa

Welcome to our beautiful campus!

The University of Iowa is a major national research university and member of the AAU. Founded in 1847 and consistently ranked among the top public universities in the country, Iowa’s oldest public university is now the largest of three governed by the Board of Regents, State of Iowa. Today, the University occupies a 1,700-acre campus in Iowa City and includes Colleges of Business, Education, Engineering, Dentistry, Law, Liberal Arts and Sciences, Medicine, Nursing, Pharmacy, Public Health, and a Graduate College.

As the first U.S. public university to admit men and women on an equal basis and regardless of race, The University of Iowa also boasts the first College of Law west of the Mississippi River. The university has often led the country in academic innovation. The MFA degree was invented at the University of Iowa, thereby making it the first to accept creative work in theater, writing, music, and visual art as theses for advanced degrees. The university established the first educational radio station west of the Mississippi; broadcast the world’s first educational television programs; and developed educational testing, in which the university continues to hold preeminence.

Over 30,000 students are currently enrolled at Iowa. Fifty-four percent come from Iowa, 28 percent from adjoining states, and 5 percent from the remaining states. International students from 114 countries make up 12.7 percent of the University’s enrollment and that figure continues to increase each year. The university, with an annual operating budget of more than $3.5 billion, is the area’s largest employer with approximately 2,800 faculty and 13,000 staff members.

A diverse community, an affordable place to live, and a vibrant cultural life make Iowa City an attractive home for scholars, scientists, artists, writers, and professionals of all kinds. A growing community of about 72,000 people, Iowa City takes pride in openness, inclusion, and safety.

But it’s also a cultural hub, a gathering place for artists of every medium, the home of some of America’s most inventive minds, and so much more. Iowa City is one of just 20 UNESCO Cities of Literature in the world, and the only one in the U.S., establishing it as an international destination for creative thinkers. That energy fills the streets, creating a vibrant place that we love to call home.

With outstanding affordable health care, excellent libraries and schools, historic neighborhoods, and a downtown filled with a lively mix of restaurants, shops, theater, music, and festivals, Iowa City is casual, comfortable, and cosmopolitan. Chicago, St. Louis, and Minneapolis/St. Paul are within easy driving distance, while the nearby Eastern Iowa Airport connects travelers to the world.

For all these reasons, Iowa City is consistently voted one of the best places to live in the U.S.