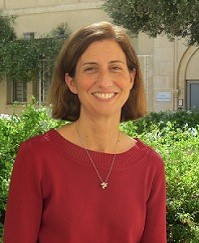 Rema Afifi joined the College of Public Health in summer 2017 as a professor of community and behavioral health. An alumna of the UI, her academic career and passion for public health have taken her to many places around the globe. Read more about her work in global health, special interest in youth populations, and why public health is a great fit for students interested in issues of equity and justice.

Rema Afifi: I got a bachelor’s degree in psychology here at the University of Iowa, actually. I was fascinated with behavior and the brain. At some point, though, I realized that I wanted to be on the prevention side of behavior change rather than on the more curative side. So, after I finished my undergrad, I went to University of North Carolina at Chapel Hill to get my Master of Public Health (MPH) with a concentration in health behavior and health education. I later went on to get my PhD in health services research with a minor in behavioral science from Saint Louis University.

Q: What other institutions have you worked at besides the University of Iowa?

RA: After I got my MPH, I moved to Atlanta to be an intern with the Centers for Disease Control and Prevention for nine months. I was in the Office of Public Health Planning doing interesting work strategizing with state health departments. It was exciting work, but I felt I needed more on-the-ground experience.  I then shifted from that position to be a health educator at a very local level, at the DeKalb County Board of Health. I worked for four years doing injury and violence prevention specifically for children through the Safe Kids Campaign. In 1993, I moved to St. Louis and pursued my PhD. Then, in 1997, I actually moved back to my home city and country — Beirut, Lebanon. I’ve been there the last 20 years working at the American University of Beirut, Faculty of Health Sciences. I just recently moved back to the United States and specifically to the University of Iowa College of Public Health in July 2017.

Q: Do you feel like your life growing up overseas has influenced your professional life throughout the years?

RA: Oh, absolutely. Growing up, I was exposed to the idea of diversity early on because my parents had an intercultural marriage. I think they and my grandparents were very progressive in accepting a cross-cultural marriage. Being the result of two different cultures has allowed me to understand and accept differences and feel very comfortable in at least two global regions: the Arab world and the United States. I also grew up having access to an American passport, which was such a privilege and not common, and I was aware of that. I was aware that I had a lot of opportunities that many of my extended family members, friends, and neighbors did not have.  I come from a place that struggles with various layers of inequity in the local and global spheres.

Q: A lot of your research has revolved around the health and well-being of youth populations. What has made you so passionate about this?

RA: From the vantage point of war, conflict, and uncertainty, which is where I have spent most of my working life, interventions have tended to focus on maternal and child health along with water and sanitation.  Young people are often not paid much attention. They are, however, incredible assets to any community, and have energy and hope that, if engaged effectively and equitably, can truly make a difference in their own lives and that of their community. Also, globally, we have become so much better at keeping younger babies alive, but have not focused much on the second decade of life. Unless we start to focus on that next stage, we risk losing all the momentum and success we have achieved in that first decade.

I believe that young people have this incredible potential that we tend to ignore. We tend to be “scared” of young people because they are passionate and they want to make change. They are a group who are hopeful and energetic and can make wonders happen, but there’s no space for them to do it. I fell across this concept of positive youth development, which is about focusing on assets and strengths rather than risks. And I was exposed to the concept of “youth at promise,” which was paradigm-shifting for me–what if we thought of all youth “at promise” instead of “at risk”? It changed my perspective completely, and I have conducted research and practice with young people from this starting point.

Q: What do you believe you can bring to the table as director of graduate studies in the Department of Community and Behavioral Health?

RA: I believe I have a unique perspective to offer because I have insight and 20 years of experience in global health from the developing world. I also bring a lot of administration experience with me. Graduate public health education has been such an important part of my academic career from the very beginning.

Q: Is there anything you would like to say to undergraduate students who are thinking about pursuing public health at a graduate level?

RA: Public health is a life mission. It’s hard to separate your non-work life from it because it becomes a way of life. Public health is very much about values. For those who are passionate about issues of equity and justice, public health is a great field. Very few people get into this field because they know exactly what it is. They often pick public health because they find a place in which to be an activist and there are so many things that you can be an advocate for. It’s truly a great profession.

Skye Corken is a junior at the University of Iowa majoring in Global Health Studies and earning a Certificate in Writing.