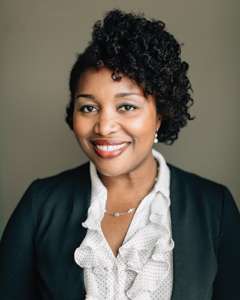 The University of Iowa has named College of Public Health alumna Adaeze Enekwechi (07PhD) a recipient of its 2019 Distinguished Alumni Award in the Recent Graduate category. She and six other award recipients will be recognized at a special ceremony and reception on Oct. 18 at the Voxman Music Building.

A health care executive who served in the White House, Enekwechi is widely admired for tackling complex policy challenges and studying how the health system can work for everyone, particularly vulnerable populations.

From 2015 to the end of the Obama administration, Enekwechi was the White House’s associate director for health programs in the Office of Management and Budget, where she oversaw a health budget of more than $1 trillion. Holding what’s been described as the government’s most important health post, Enekwechi was a key policy advisor to President Obama and worked with Congress and the executive branch to implement the federal budget.

Although she was less than a decade removed from earning her doctorate from the UI College of Public Health, Enekwechi was well-equipped for the high-profile position. She began her career as an analyst at the Congressional Budget Office after completing her master’s degree in public policy. She returned to the University of Iowa to obtain her doctoral degree and went on to work at the University of Chicago School of Medicine, after which she became the associate director for innovation and new product development at Joint Commission Resources in Illinois.

Enekwechi then became a senior researcher for Health Research and Educational Trust, a Chicago-based arm of the American Hospital Association. In 2010, she moved to Washington to work in health care policy. There, she was a senior analyst for the Medicare Payment Advisory Commission, the first senior program officer at the Patient Centered Outcomes Research Institute, and a managing consultant at the Lewin Group, where she led several payment policy evaluation and research projects for the Centers for Medicare and Medicaid Services.

Since leaving the White House, Enekwechi has returned to the consulting world. She’s currently president of IMPAQ International, a $100 million policy research and technology firm in the Washington, D.C., area that helps governments, businesses, foundations, nonprofits, and universities enhance their programs and policies. She also is a member of the National Academy of Medicine’s Emerging Leaders in Health and Medicine group, and she serves on the Board of Public Health Institute and other advisory boards.

“Adaeze worked in the White House with integrity and calm in an intense and sometimes difficult environment,” says Shaun Donovan, former director of the Office of Management and Budget. “I never saw her lose her cool despite enormous stakes, and her intelligence and knowledge always made a difference.”

Throughout her career, she has held firmly to the belief that access to health and wellness are critical aspects of overall well-being. Her work to turn that belief into a reality has been a positive reflection of the College of Public Health’s core values as she works to engage diverse stakeholders and thought leaders to drive innovation in health care delivery system and payment reform initiatives.

Since 1963, the University of Iowa has annually recognized accomplished alumni and friends with Distinguished Alumni Awards. Awards are presented in seven categories: Achievement, Service, Hickerson Recognition, Faculty, Staff, Recent Graduate, and Friend of the University.