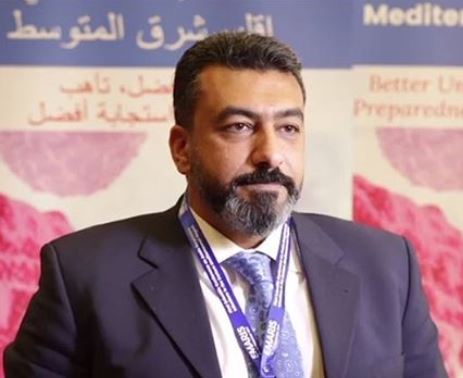 Ghazi Kayali, PhD, MPH, is part of a global network of scientists dedicated to researching novel viruses transmitted between animals and humans. He earned his doctorate degree in epidemiology from the University of Iowa College of Public Health in 2008. He is the Chief Executive Officer of Human Link, a Lebanese-based non-governmental organization with the mission to design and conduct scientific research and projects in the fields of bio-medicine, public health, environment, economy, and human development aimed at improving global knowledge and enhancing local population livelihoods. He is also an adjunct assistant professor in the Department of Epidemiology, Human Genetics, and Environmental Sciences at the University of Texas Health Sciences Center.

Human Link is contracted by the US National Institutes of Health to conduct influenza and coronavirus research in the Middle East. The NGO collaborates with the World Health Organization (WHO) Collaborating Center on the Ecology of Animal Influenza Viruses based at St. Jude Children’s Research Hospital in Memphis, Tennessee. Human Link currently conducts influenza and coronavirus research in Egypt, Lebanon, Tunisia, Uganda, Benin, Togo, and Morocco. Kayali is also a regional WHO consultant on One Health, Pandemic Preparedness, and International Health Regulations.

Kayali’s work was recently highlighted in the Netflix docuseries “Pandemic: How to Prevent an Outbreak,” and he was featured in a segment on the ABC news program 20/20 that looks at the experts who identify the source of an outbreak, determine its transmission, and work to stop its spread. Kayali recently answered a few questions about his research and the ongoing novel coronavirus pandemic.

Q: The novel coronavirus (COVID-19) is the latest virus to cause a pandemic, and it won’t be the last. Having investigated previous zoonotic viruses such as MERS and SARS, what are some of the similarities and differences you see in the response to the current situation? In other words, what lessons have scientists and policymakers successfully learned from previous outbreaks? Are there improvements needed?

A: Global pandemic preparedness has improved since 1997 when bird flu emerged and killed birds and humans in Hong Kong. The US government as well as other international organizations such as the WHO,  Food and Agriculture Organization of the United Nations, and World Organisation for Animal Health provided technical and financial support to governments to improve their capacities for prevention, detection, and response to emerging novel influenza viruses. The WHO initiated the Pandemic Influenza Preparedness scheme aimed at improving the world’s preparedness levels and the International Health Regulations that outlined governments’ responsibilities for improving preparedness and mandating reporting of potentially dangerous infections.

On the research side, the US National Institute of Allergy and Infectious Diseases established the Centers of Excellence for Influenza Research and Surveillance (CEIRS) that provided research support to a vast global network of influenza scientists to conduct influenza surveillance in humans and animals and study the viruses that are being found. This network also played an important role in research response to global epidemics of influenza and coronaviruses. My research funding is primarily through this network.

Given those developments in response to bird flu, the world was better prepared when SARS emerged in 2003. Most countries had capacity in place that could be used for detection. Researchers from the CEIRS network played a key role in identifying and characterizing the virus. In 2009, the H1N1 pandemic hit, but because of the response and research networks in place, a vaccine was tested and produced within six months of the start of the pandemic.

In 2012, MERS coronavirus was detected and described by a member of the CEIRS network, and then my group was among the first to establish that camels are the source of human infections. This led to improving the public health measures and reducing the number of primary infections. This was evident by the fact that the majority of cases of MERS were hospital-related rather than community-based.

This cumulative global experience is allowing a much better response to COVID-19. Almost all countries were ready with detection capacity in anticipation of virus introductions. Coordination between countries was also evident.

However, there is still room for improvement. Regional cooperation can still be enhanced. For instance, the situation in Europe with the spillover of cases from Italy to other EU countries showed that even developed countries can still improve their capacities. There were differences noted between EU countries, but the Union as a unit was not prepared.

Furthermore, more support is needed for less-developed countries where we continue to have major gaps in preparedness and response capacities. More funding is needed to look for animal viruses that can potentially infect humans.

Q: The One Health philosophy recognizes that the health of people, animals, and the environment are closely intertwined. What are some barriers to and opportunities for implementing a One Health approach in policies and programs?

A: I have been advocating for One Health throughout my career, and all my research is focused on the human-animal interfaces where virus transmission can occur. There have been several global efforts to enhance and adapt One Health on national levels. Almost everyone, whether scientists or policymakers, believe in One Health and its importance in preparedness for pandemics.

However, countries struggle in implementing One Health due to lack of resources, or resistance of some of the sectors involved. The way forward is to stop discussing One Health as a philosophical or an academic notion and start institutionalizing it. The best example I believe is Finland, which established an independent governmental institution for One Health that is charged with coordinating all activities within this notion.

Q: Your research involves a great deal of variety, including international travel, gathering samples from a wide range of animals and people, to working with students and colleagues from all over the world. What are some of the biggest challenges—and biggest rewards—in your work?

A: Over the years, my work has taken me to several countries for work, meetings, and conferences. I am part of a global network of dedicated scientists whose expertise helps improve my own research and who welcome my students to receive more training at their labs. My circle of friends includes great people from every continent. We get a sense of satisfaction every time we discover a novel virus, identify a potential host, or prepare a seed vaccine (the source from which all subsequent batches of a vaccine are produced).

However, like other scientists, the burden of securing research funding is high, especially when the group grows in numbers. On average, I spend 150 days a year away from home traveling for work, time that is taken away from my family.

Q: The Netflix docuseries “Pandemic: How to Prevent an Outbreak” features a number of people who are dedicated to researching and preventing global outbreaks. What are one or two main points that you hope viewers take away from the series?

A: One is that pandemic preparedness requires efforts from several disciplines. The series shows the roles that researchers, clinicians, policymakers, first responders, and NGOs play in preparing the world for a pandemic. Also, we all have a role to play in preventing outbreaks of infectious diseases by at least following simple hygiene rules and getting vaccinated when a vaccine is available.

Q: What type of skills do you recommend that students develop if they’re considering a future career in infectious disease research?

A: By education, I am an epidemiologist. However, when I was doing my PhD and my postdoc, I spent a lot of time in the lab learning how to actually conduct the various assays and understanding their strengths and limitations. I also learned phlebotomy (collecting blood samples) and the techniques needed for handling animals and obtaining samples from them. My advice to students is to learn such skills and expand their knowledge beyond what they learn in classrooms as much as they can.