Professor Elizabeth Chrischilles has been named the head of the University of Iowa Department of Epidemiology. Her appointment begins July 1, 2017. 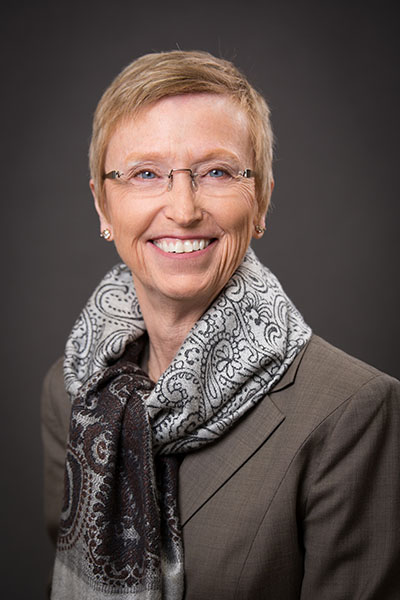 Chrischilles is professor of epidemiology and the Marvin A. and Rose Lee Pomerantz Chair in Public Health. She also directs the Health Effectiveness Research Center and is associate director both for population sciences in the Holden Comprehensive Cancer Center and for biomedical informatics in the UI Institute for Clinical and Translational Science. She holds a secondary appointment in the Department of Pharmacy Practice and Science in the UI College of Pharmacy.

“Dr. Chrischilles will provide outstanding leadership for the faculty, students, staff, and alumni in the Department of Epidemiology,” says Sue Curry, dean of the College of Public Health. “Throughout her distinguished career at the University of Iowa, she has excelled in research, education, and service to her profession and the state. Her expertise in biomedical informatics and comparative effectiveness places her at the vanguard of a critical area in public health and public policy. In addition, she has been an exceptional teacher and mentor. I am delighted to welcome Betsy to this leadership role in the College of Public Health.”

Chrischilles earned B.S., M.S., and doctoral degrees in pharmacy at the University of Iowa. She joined the UI College of Pharmacy faculty in 1982 and the UI Department of Preventive Medicine (a precursor to the College of Public Health) faculty in 1987. She joined the UI Department of Epidemiology as an associate professor when it was established with the formation of the college in 1999.

Chrischilles’ additional research interests include cancer outcomes in practice, medication use and effects among the elderly, and health services epidemiology. She has authored or co-authored more than 160 peer-reviewed papers and is the associate director for population sciences in the UI’s Holden Comprehensive Cancer Center. She co-leads the U.S. Food and Drug Administration Sentinel Initiative Applied Surveillance Core, and is currently leading a cancer outcomes research agenda in the Greater Plains Collaborative, part of the National Patient-Centered Clinical Research Network.

“Now is such an exciting time to be an epidemiologist,” says Chrischilles. “This discipline is at the forefront of major changes occurring in the health sector – developing new approaches to access and utilize an ever-increasing quantity of health data, evaluating methods to guide decisions in areas such as cancer treatment and infectious disease prevention, and participating as full members in the team-based approach to science that today is expected and rewarded. I am excited to be part of a field and a department that are so well-positioned to inform the grand challenges of patient and population health as we move into the future.”

Chrischilles has taught advanced classes in epidemiology and has served on numerous departmental, collegiate, and university committees. She has been a member, co-chair, or chair of a number of state and national committees and workgroups, including chairing the U.S. Pharmacopoeia’s Therapeutic Decision-Making Committee.

Her honors include receiving the College of Public Health’s Faculty Teaching Award in 2004, the college’s Distinguished Faculty Lectureship in 2007, and the college’s Faculty Research Award in 2014. In 2009, Chrischilles received the Iowa Pharmacy Association Appreciation Award and in 2015 she was named a Fellow of the Hedwig van Ameringen Executive Leadership in Academic Medicine at Drexel University College of Medicine.