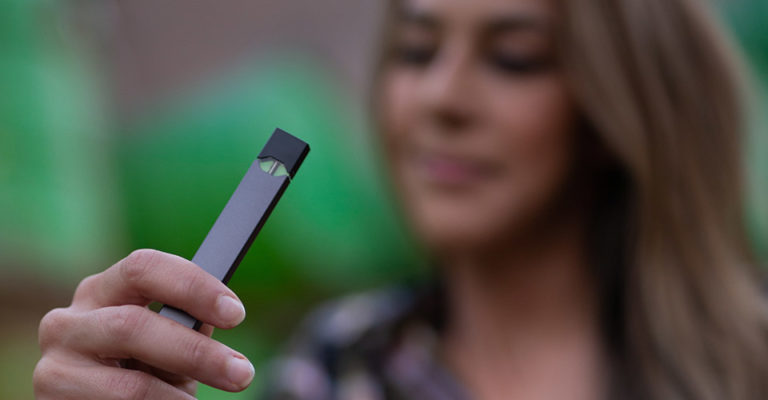 While e-cigarette use among college students has increased over the last several years, there are few published studies about interventions designed to prevent their use or cessation among this group.

New research from the University of Iowa (UI) College of Public Health took a collaborative approach to deliver messages specifically tailored to the student audience in order to impact perceived risk of e-cigarette use and increase awareness of resources for cessation.

Alejandra Escoto, currently the program coordinator at the Division of Child and Community Health in the UI’s Stead Family Department of Pediatrics, was a student in the Master of Public Health Program at the UI College of Public Health at the time of the study and is its lead author. The research team, including Trisha Welter and Steph Beecher of the UI Office of Student Wellness, conducted focus group discussions with UI students to better understand the context of e-cigarette use on campus, solicit feedback on sample messaging, and use those findings to design and deliver targeted campaign materials.

According to the study recently published in Addictive Behaviors, six themes emerged from the focus group discussions that helped guide the development of campaign materials: vaping as a popular social activity, progression to and perceptions of addiction, cessation, health effects and uncertainty, intervention points, and individual agency and message tone.

“We crafted new campaign messages that aimed to increase students’ perceived susceptibility of nicotine addiction through e-cigarette use, increase the perceived severity of the health risks associated with e-cigarette use, and increase perceived self-efficacy by highlighting on-campus cessation resources,” Escoto says. “From the focus group discussions, we also found that messages with paternalistic tone and shaming language were not going to be effective, so we carefully crafted our messages to avoid those.”

These new messages and materials were then integrated into student wellness programming and disseminated across the university and community via the UI Office of Student Wellness.

According to Shannon Lea Watkins, assistant professor of community and behavioral health at the UI College of Public Health and co-author of the study, the study emphasizes the potential for collaboration among students, researchers, and a university’s student wellness department on projects such as this.

“When we can combine the student perspective, scientific approach of researchers, and the infrastructure and capacity of on-campus wellness services, we can be much more effective in creating campaigns that reach and resonate,” she says.

Escoto says that at the time this project was being developed, not much was known about how to address the emergence of e-cigarette use among young adults. “Studies and interventions at the time focused mostly on adolescent experimentation or older adults using e-cigarettes as a method of cessation,” she says. “With college often offering a unique social and environmental context for young adult health and health behaviors, I found it important to focus on methods for addressing this emerging health issue in a population that was often being overlooked.”