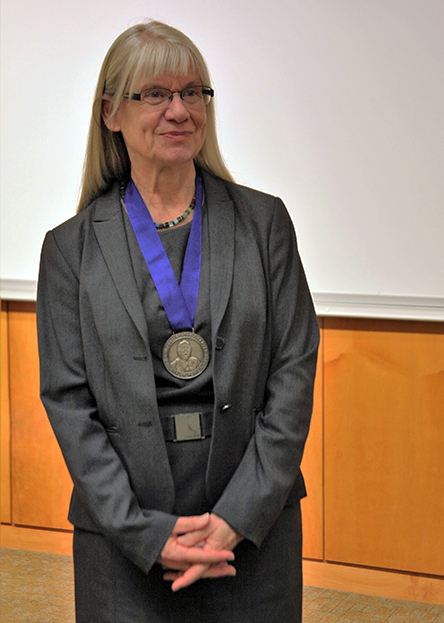 Gabriele Ludewig, CPH professor of occupational and environmental health, recently was honored with the 2016 John Doull Award. This prestigious award is presented each year by the Central States Chapter of the Society of Toxicology (CS-SOT) to honor the contributions of an outstanding member to the discipline of toxicology and the Chapter.

In 2003, Dr. Ludewig joined the University of Iowa, where she was instrumental in re-establishing the Interdisciplinary Graduate Program in Human Toxicology, for which she serves as its Director of Graduate Studies. She also is the leader of the Training Core of the Iowa Superfund Research Program, which supports training within the multidisciplinary Superfund program.

She has dedicated considerable time and effort to the training and mentoring of graduate students, aside from her official roles as Training Core Leader and Director of Graduate Studies within the IDGP in Human Toxicology. She has also provided service to the CS-SOT, having been elected and served as Vice President (2006/07), President (2007/08), and Past President (2008/09) of the Central States Chapter of the SOT. During her tenure as President, she organized the CS-SOT annual meeting in Iowa City, which was attended by more than 100 scientists and students. She is on the editorial board of two toxicology journals and has reviewed grant proposals and reports for NIH, NTP, and others.

For the last decade, Dr. Ludewig has tenaciously pursued the question of whether persistent organic pollutants, like polychlorinated biphenyls, could be genotoxins. Their many other toxic attributes had been well-established, but the genotox question remained open. To address this basic question, she employed several lines of approach. Using a cellular system that possesses essentially no ability to chemically transform PCB metabolites, she explored the various genotoxic attributes of a wide range of synthetic PCB metabolites, demonstrating that discrete effects are elicited by each. She employed a transgenic rat model with which she demonstrated that PCBs can cause mutations in vivo. In a third approach, she and her students found that PCBs and metabolites are telomerase and telomere poisons. These studies laid the foundation for a key finding in the recent IARC re-evaluation of the carcinogenicity of PCBs, by providing missing information on their initiating potential. Dr. Ludewig’s contribution was critical to the elevation of PCBs to Group 1 Human Carcinogens.