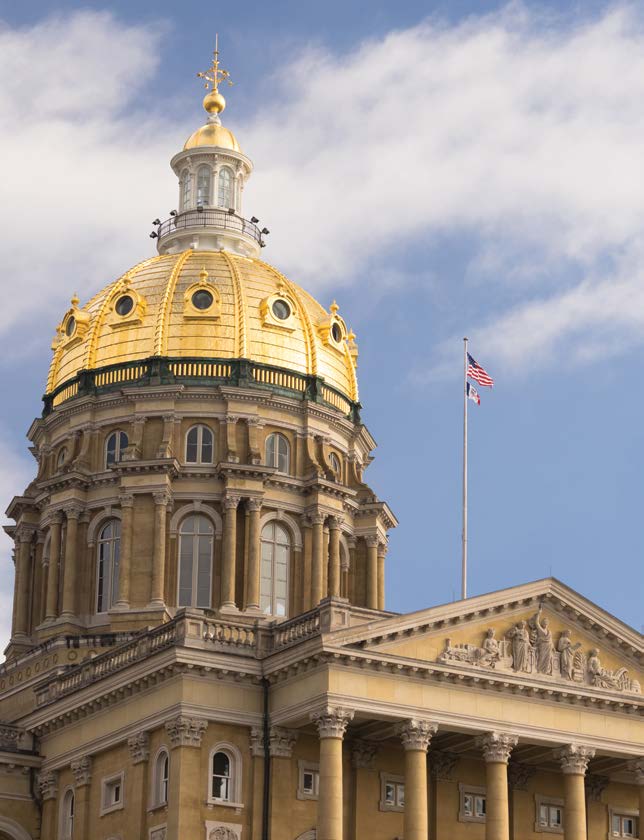 One of the most effective ways to improve the health of large numbers of people is through public health policy. Examples of successful policy initiatives with far-reaching impact include seat belt laws, tobacco regulations, and banning lead from paint.

To help faculty enhance their skills in translating public health research into practice and policy, the College of Public Health recently established a new Policy Fellow Program. Offered through the college’s Iowa Institute of Public Health Research and Policy (IIPHRP), the year-long program creates opportunities for primary faculty to attend training work­shops, connect with experts, interact with policymakers and stakeholders, and develop and implement a policy-related project.

“As researchers, we have a desire to impact our community, and that means translating evidence into policy or practice change. Building stakeholder coalitions and creating effective dissemination plans are strategies that work, but are not skills most researchers have been formally trained in,” says Vickie Miene, IIPHRP interim director. “The Policy Fellow Program provides a supportive and individualized learning environment for faculty to experiment and learn these important skills while simultaneously translating their research into public health practice.”

Each fellow develops and implements an “action learning project” that focuses on a critical public health topic. The project includes at least one stakeholder meeting and a final product, such as a policy brief, proposed legislative language, or a how-to guide, to disseminate at the end of the fellowship.

“Our goal is to select fellows who are enthusiastic, who address significant public health issues, and who propose a project that will likely generate an effective example of translating research into policy or practice,” says Miene. 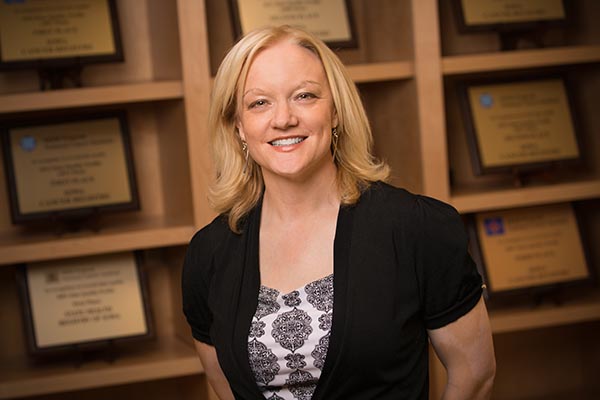 The ICR is a population-based cancer registry that has served the State of Iowa since 1973. The registry is funded by the National Cancer Institute as part of its Surveillance, Epidemiology, and End Result’s (SEER) Program. Through its registries, the SEER Program routinely collects cancer data and patient demographics and is the authoritative source of information on cancer incidence and survival in the U.S.

According to SEER, “The ICR provides accurate and thorough reporting of cancer disease. The ICR has been consistently recognized for its extremely high quality data. However, Iowa has some of the weakest reporting laws compared to other states. Iowa also has one of the lowest rates of e-path (electronic) reporting of all SEER registries.”

In Iowa, about 25,000 cancer abstracts per year are collected from hospitals, pathology laboratories, cancer treatment centers, and physician practices. Two-thirds of the abstracts are collected by the 14 Iowa hospitals with accredited cancer centers. Trained staff employed by the ICR collect cancer data from the other 104 hospitals and non-hospital sites of diagnosis. The ICR maintains the confidentiality of the patients, physicians, and hospitals providing data.

To ensure continued funding from NCI, it is necessary to address the low rate of electronic reporting and Iowa’s weak cancer reporting requirements, which require a disproportionate amount of NCI funds to be spent on cancer data collection compared to other SEER registries. 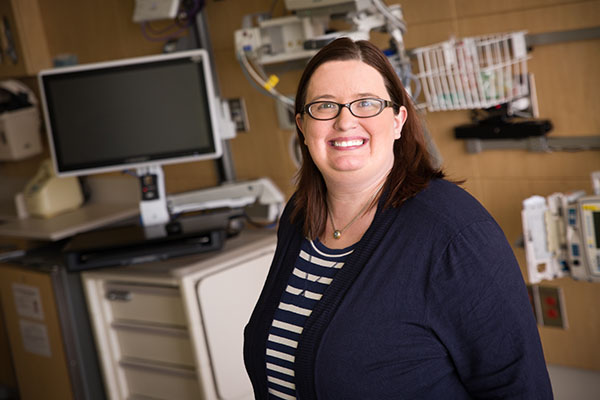 Kelli Ryckman, associate professor of epidemiology, has long-standing research interests in genetics and the complications of preterm birth.

“My passion is finding ways to improve the care of preterm, low-birth-weight, and sick newborns in the Neonatal Intensive Care Unit,” Ryckman says about her motivation to apply to the Policy Fellow Program.

Her project is to refine the newborn screening policy for babies in the NICU that will result in fewer false-positive screens.

“Through the program, I hope to build consensus based on the evidence and disseminate a uniform set of guidelines for newborn screening in the NICU that allows for better use of resources in Iowa and beyond,” Ryckman says.

State newborn screening programs are critical public health services aimed at screening every child born for specific genetic, endocrine, and metabolic conditions that, if left untreated, can lead to severe disability or death.

There are about 39,000 births in Iowa each year, and approximately 10 percent of all births in Iowa are preterm, low-birth-weight, or transferred to the NICU. This 10 percent also makes up over a third of the follow-up workload required for the newborn screening program due to the high false-positive rate in this population. Transfusions, parental nutrition, medications, and timing of the test in the NICU can affect the validity of the newborn screening test.

“It’s well-recognized that premature, low-birth-weight, or sick newborns are more likely to falsely screen positive for one or more of the newborn screening tests,” Ryckman says. “False positives have adverse impact on parents and require additional testing, which can add to the stress on the baby.”

To address these challenges, the Clinical and Laboratory Standards Institute, a non-profit organization dedicated to improving clinical laboratory testing quality, developed a guideline for screening preterm, low-birth-weight, and sick newborns in 2009. Recent surveys have shown that despite the recommendations, many physicians caring for newborns in the NICU are unaware of its existence and that only 25 percent of states have adopted or were planning to adopt the recommendations, the American Academy of Pediatrics reports. Iowa has not yet adopted the recommendations.

Ryckman’s policy recommendation is to develop and disseminate a uniform set of guidelines to be implemented across Iowa. These guidelines will align with the national recommendations, provide for better utilization of resources, and decrease false positives in this special population of newborns. 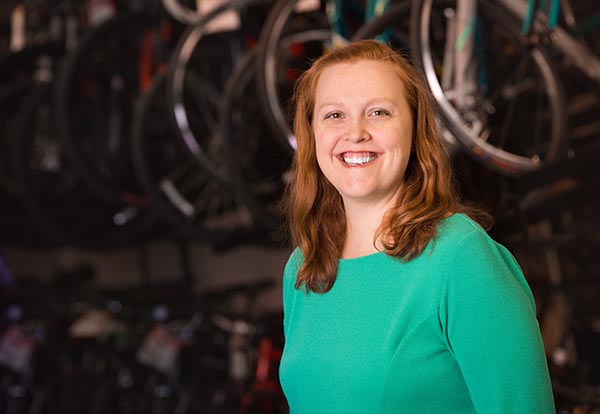 Cara Hamann, an associate in the Department of Epidemiology, developed an issue brief to highlight bicycling safety research, a topic that has received attention recently due to an increasing number of auto­mobile and bicycle crashes in Iowa. In collaboration with the Iowa Bicycle Coalition, she also held a bicycle safety policy action forum of stake­holders in December 2016 and produced a forum recap document containing statewide key issues and action items.

Bicyclists have higher crash-related risk of injury and death due to their lack of physical protection, slow speed, and size differential compared to other roadway users. In alignment with the Iowa Bicycle Coalition 2017 legislative initiatives, Hamann supports several changes in Iowa code to make bicycling safer.

Require motorists to change lanes when passing bicyclists
Motorists hitting bicyclists from behind have accounted for about half of fatal bicycle crashes in Iowa over the past five years, Hamann says. Penalties assessed to motorists at fault in these fatal crashes are generally a traffic ticket with an enhanced penalty of a $1,000 fine and six-month license revocation. A measure to require vehicles to change lanes to pass bicyclists passed both the Senate and House sub-committees (HF 513, SF 450), but did not advance further.

Increase penalties and make distracted driving a primary offense
Most Iowa drivers don’t receive charges in bicycle–motor vehicle crashes, regardless of fault. Two bills that increase penalties were passed during the 2017 legislative session and signed into law by Gov. Branstad. One bill (SF 234) changes hand-held electronic communication (writing, sending, or viewing electronic messages) from a secondary to a primary offense and will go into effect starting July 1. However, this new law still allows drivers to use hand-held devices to make phone calls or check GPS directions. The second bill (SF 444) increases penalties to allow drivers to be charged with reckless driving when their hand-held device use causes a fatality. This type of charge is a Class C felony.

Increase appropriations for bicycling infrastructure
Results from a study of 294 sites in Iowa suggest that bicycle lanes and shared lane markings can reduce crash risk by as much as 60 percent. In a sample of Iowa drivers, shared lane markings improved driver positioning during overtaking, especially among older drivers.

“I was motivated to apply to this program to develop skills to translate my research into tangible products to be used for policy change and real impacts on safety,” says Hamann. “I want to use this opportunity to draw attention to bicycle safety and complement the current grassroots efforts underway in the bicycling community.”