Researchers from across the College of Public Health and UI campus are working together to prevent, detect, and treat cancer.

When Kim Merchant learned she had breast cancer in January 2018, she “was a little shell-shocked.” As an active person with a healthy diet and no family history of the disease, she was stunned to be diagnosed with stage II invasive ductal carcinoma at the age of 61. “It just wasn’t on my horizon,” she says.

An annual mammogram detected the first of two spots on her left breast, setting off a chain of additional tests, biopsies, diagnosis, two surgeries, and six weeks of daily radiation treatment and its side effects. Cancer consumed six months of Merchant’s life, during which she continued to work as much as possible.

Although Merchant is extremely grateful for the support and care shown by her friends, family, and coworkers, she’s honest about the difficulties of coping with cancer: “It’s really a frightening and lonely time.”

Merchant says the experience was made easier thanks to the excellent care she received at the University of Iowa Hospitals & Clinics. “Knowing you’re in good hands takes away a lot of stress,” she says.

Merchant is one of an estimated 17,800 Iowans diagnosed with a new cancer in 2018 and among thousands of cancer patients who receive treatment at the UI Hospitals & Clinics. The University of Iowa is home to the Holden Comprehensive Cancer Center, one of the nation’s top cancer research and treatment centers and Iowa’s only National Cancer Institute (NCI)-designated comprehensive cancer center.

The center coordinates all cancer-related research, education, and patient care by faculty from 41 departments and six colleges, as well as UI Hospitals & Clinics and UI Stead Family Children’s Hospital. The center is committed to making breakthrough scientific discoveries and turning them into improved approaches to cancer prevention, early detection, and treatment that directly benefit cancer patients.

CEPS is a multidisciplinary team of more than 50 faculty members and researchers from the Colleges of Public Health, Nursing, Medicine, Pharmacy, and Liberal Arts and Sciences. Their research focuses on cancer etiology, including studies that explore genetic and/or environmental risk factors for cancer at the population level; cancer prevention and control; and cancer health services and outcomes.

“The goal of the CEPS program is to conduct population-based research that improves our understanding of what causes cancer, how cancer can be prevented and, if not prevented, how it can be detected early in its course, and to increase quantity and quality of life for cancer survivors,” says Charles Lynch, CPH professor of epidemiology and the CEPS program co-leader along with Richard Hoffman, professor of internal medicine.

Given that “population science” is in the research program’s title, it’s not surprising that public health researchers make up almost half of the CEPS team. Public health plays an important role in addressing cancer by reducing risk factor exposure and enhancing protective factors, getting more people screened for the early detection and treatment of cancer, and in evaluating health services and outcomes, says Lynch.

CEPS members are highly productive researchers. To give a snapshot, between January and August 2018, CEPS investigators produced 74 publi­cations and secured 35 grants totaling $4.4 million. Current research projects involving CEPS members include studies on breast and ovarian cancer, environmental exposures such as PCBs and nanomaterials, and smokeless tobacco use in rural veterans. 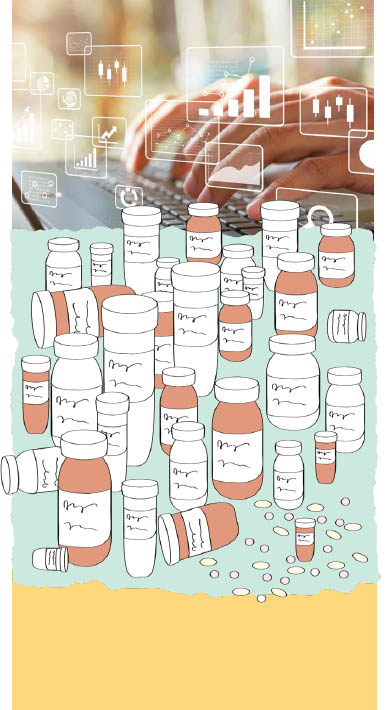 A key component of cancer research is large data sets such as those provided through the Surveillance, Epidemiology, and End Results (SEER) Program funded by NCI. SEER collects and publishes cancer incidence and survival data from population-based cancer registries, including the Iowa Cancer Registry based in the College of Public Health.

Smith directs the Biostatistics Core within the center. The core’s services include consultation on study design, selection of outcome variables, and formulation of hypotheses; sample size estimation; protocol development; data analysis; and education and training.

One initiative designed to harness the power of big data to make it faster, easier, and less costly to conduct clinical research is the National Patient-Centered Clinical Research Network (PCORnet). PCORnet is a national “network of networks” that collects data routinely gathered in a variety of health care settings. These data are used to answer practical questions that help patients, clinicians, and other stakeholders make informed health care decisions.

“In real-world practice, doctors and patients often have questions about which drug is best for a certain situation,” says Chrischilles, who also serves as associate director for population sciences in the Holden Comprehensive Cancer Center. “A lot of these questions never get answered in a clinical trial. Organizing data into a standard structure makes conducting comparative effectiveness research into these questions much more efficient.”

Data that are coded consistently across sites enable researchers to study how new treatments compare in effectiveness and safety to other therapies, understand how patients differ in response to specific treatments, and identify optimum drug dosages and regimes, along with many other questions.

Chrischilles is co-principal investi­gator of a PCORnet-funded project that is examining the patterns of use of molecular biomarkers and associated targeted cancer therapies for patients with invasive solid tumors. The project involves nine participating sites and is designed to test and expand the capacity of PCORnet to describe the details of cancer pathology, test results, and cancer treatment outcomes.

Almost a year after her diagnosis, Kim Merchant is actively engaged with work and life, although life is different than it was before cancer. She’ll be taking medication for years and will continue to have follow-ups with her care team. “I’m still a cancer patient,” she says. “Every time I get ready to have my annual checkup, I’m going to think about concerns I never had before.”

Merchant found it helpful to reflect on her experience by journaling. Following a radiation treatment, she wrote:

It is a strange sisterhood. As I walk into the pavilion, a female patient I’ve seen in the clinic patient waiting area is walking out. We smile and nod. Some women talk while waiting… Some don’t talk. Some have hair; some don’t or have a fuzzy buzz. Even out of the hospital, women who are survivors want to help, reach out, encourage—from my cousin’s friend to my banker.

She also met with a psychologist who specializes in working with cancer patients. “I thought, What can I learn from this?” says Merchant. “How can I help others, and help myself?”

Part of that process has been openly sharing her experience. “I hope that honesty helps others,” she says. “I don’t want there to be a stigma about having cancer.”