Two CPH students traveled to southern India to research the occupational conditions of workers who harvest tea leaves by hand.

Josie Rudolphi and Maya Ramaswamy did not anticipate the leeches. The two College of Public health graduate students spent a month in summer 2015 conducting research on the working conditions of tea plantation workers in Tamil Nadu, a region of southern India. They went armed with questionnaires about occupational exposures, including strain and stress put on the body from bending or weight bearing. What they had not anticipated, however, were the leeches that found their ways into workers’ shoes and up sleeves, leaving bites and causing skin problems.

It was just the kind of unexpected finding that only research in the field can yield. As their professor Diane Rohlman notes of her students’ experience, “It is invaluable to dream up a project and follow it through from beginning to end. Working overseas is especially challenging because there are so many variables. You are dealing with language differences, cultural differences — even between partnering research universities — time zones, technology, and weather. The unexpected always happens.”

Rohlman says that Rudolphi, a third-year PhD student in agricultural safety and health, and Ramaswamy, a third-year PhD student in occupational and environmental health with a focus in ergonomics, both expressed interest in international public health issues since they first entered the program. Ramaswamy worked in South India for two years prior to starting at the University of Iowa and had seen first-hand the challenges faced by workers who harvest tea leaves manually.

Rudolphi, who grew up on a corn and soybean farm in east central Iowa and who has traveled extensively, though never to India, was intrigued by the project idea sketched by Ramaswamy. In particular, she wondered how she might apply her skills as a qualitative researcher.

From Iowa to India

The roadblock was funding. So when the college announced a new Global Public Health Student Travel Grant  in April 2015, the two women leapt at the opportunity. They quickly put together a proposal that included utilizing contacts Ramaswamy had developed while teaching at VIT University in Vellore, India. They proposed two projects—one quantitative using surveys, led by Ramaswamy; the other qualitative based on interviews with the workers, led by Rudolphi. Within weeks of applying, they learned that their projects were two of four awards granted in the initial round and immediately purchased airline tickets. (A second round of grant applications is currently underway.) 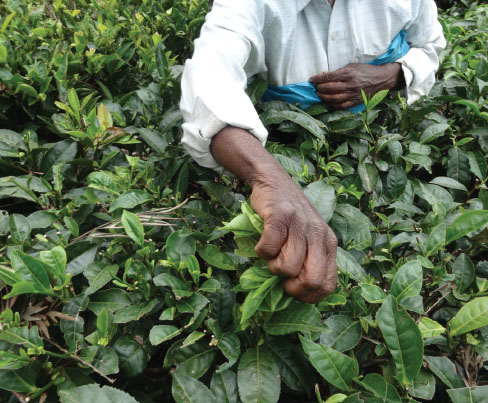 Arriving on July 12, the women spent several days crosschecking a Tamil translation of their survey and gathering their team. In a blog that the two kept during the month journey, Ramaswamy wrote, “This morning, we led a meeting with the whole study team to review the objectives of our study, practiced administering the survey, and went over sample focus group questions. We have an English professor, two graduate students from the biotechnology department, and two members of the Survey Research Center doing the heavy lifting for us once we’re out in the fields—they’ll be our Tamil interviewers conducting the surveys and interviews and, once we return, they’ll help us transcribe and translate our findings.” hand.

Two days later, the entire team was in the field, quite literally. As they interviewed and observed workers harvesting tea in a terraced tea plantation, they were thankful for the raincoats they had packed, as it was the height of the rainy season. As Ramaswamy wrote, “It drizzles, it violently mists, it pours.” Which is where leeches come in to the story.

Tea grows on waist-high bushes that can live to be more than a hundred years old. Better quality tea is grown at higher elevations, usually on steep terraces in tropical climates. Because the terrain is uneven, the work of harvesting the plants has yet to be mechanized. Instead of a machine doing the work, leaves are picked by hand by workers, usually older women, who place leaves in bags that they wear strapped to their heads.

To best learn about the working conditions of the tea pickers, Ramaswamy and Rudolphi revised a survey that is commonly used to interview workers in labor-intensive industries around the world. They anticipated that the tea workers’ challenges might be similar to those of migrant farm workers in the United States, and so rewrote some questions with those assumptions in mind. Instead, they discovered that the workers’ greatest perceived challenges were bugs, especially the leeches that got in their shoes and clothing no matter how ingeniously they tried to ward them off.

“The survey assumed certain exposures that weren’t very pertinent,” Rudolphi comments, echoing Rohlman who says that part of the reason for doing research in the field is to find interventions that will be effective. 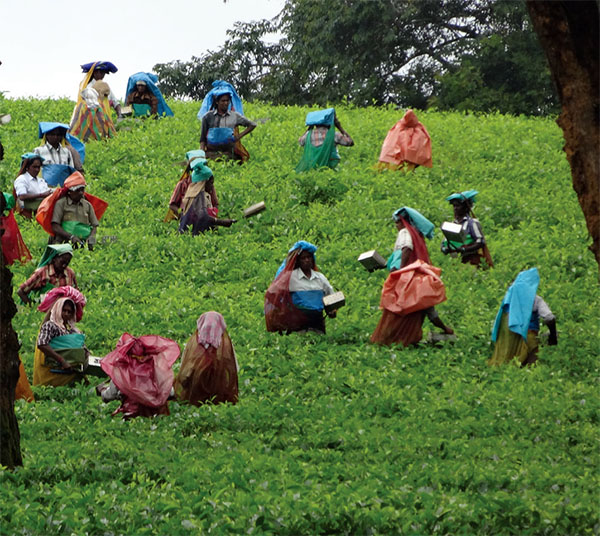 “A solution that works in the U.S. may not work in another country,” Rohlman says, noting that it is nearly impossible to figure this out until you are on the ground experiencing the same conditions as that particular group of workers.

All Ag, All the Time

During their month in India, Rudolphi and Ramaswamy learned about more than tea. They visited farms growing coconuts, sugarcane, potatoes, rice, and — yes— corn, as well as visiting livestock production facilities and a dairy. They attended an agriculture expo that reminded Rudolphi of the Midwest’s famed Farm Progress Show and spent a day at an agricultural university learning more about agricultural education in India.

The duo is currently analyzing the data they gathered, while the results of the focus groups are translated into English. They plan to present the work next year in the hopes that other researchers can use their results for further study.

Ramaswamy notes that one of the interesting pieces of the study is that it is a window into a pre-mechanized industry. Although the terrain makes it difficult, she suspects that mechanization is inevitable, in part because fewer workers want to pick tea. “Over time,” she says, “it will be fascinating to see how the tea industry changes.”

This article originally appeared in the Fall 2015 issue of InSight.