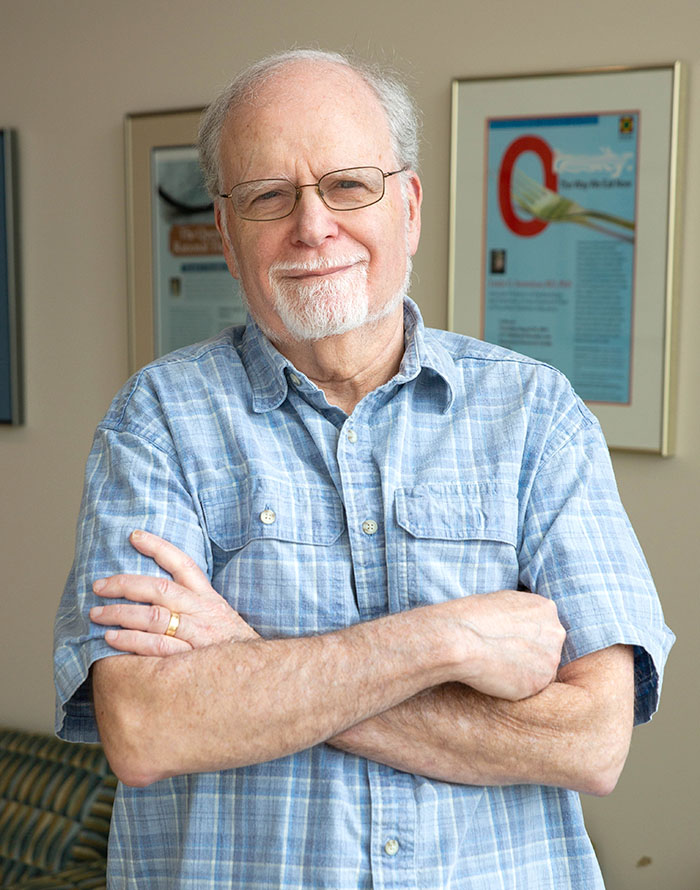 Following a distinguished career at the University of Iowa that spans nearly five decades, Robert Wallace, Irene Ensminger Stecher Professor of Epidemiology and Internal Medicine, transitioned to professor emeritus status in January 2019. His contributions to public health include authoring or co-authoring more than 500 peer-reviewed papers, teaching and mentoring hundreds of students, and providing leadership in administrative and service roles. He has been honored with multiple awards, including the Walsh McDermott Medal in recog­nition of outstanding service to the National Academy of Medicine.

Although Wallace’s title has changed, his enthusiasm for tackling complex subjects remains as strong as ever. “I don’t see myself as being retired in the usual sense. I want to continue to be creative,” he says, citing several research projects he’s currently pursuing.

That commitment to research stretches back to the beginning of his career.

“I knew early on that I wanted to be an inves­tigator as well as a physician,” says Wallace, who received his medical degree from Northwestern University Medical School in Chicago in 1967.

While doing his medical residency at Cornell University Hospitals in Ithica, New York, in 1969 he was recruited into the Epidemic Intelligence Service (EIS), a program established by the Centers for Disease Control and Prevention (CDC). EIS officers help investigate and control infectious disease outbreaks and respond to natural disasters and other public health threats.

He worked primarily in Atlanta, Georgia, and Buffalo, New York, where he earned an MSc degree in epidemiology. His three-year service with EIS “turned me into an epidemiologist,” Wallace says, recalling several particularly memorable assignments.

“I was assigned as the point person at CDC to take care of measles,” he says. While cases were greatly reduced thanks to the measles vaccine, the disease wasn’t fully eradicated in the U.S. Fast forward to 2019 and measles is a concern again, although the reasons for the disease’s persistence are very different from those of the early 1970s.

“The challenge at the time was getting the vaccine out — it was mostly a problem of distri­bution,” Wallace explains. “Today, we have the anti-vaccine movement.”

Wallace also was sent to West Africa for two months as part of the CDC’s smallpox eradication program. “Smallpox was all but eradicated in West Africa at that time, although I did see a couple of cases,” he recalls, noting that the smallpox program provided a model for controlling other infectious diseases in developing countries.

Wallace joined the University of Iowa faculty in 1972, arriving at a time when change was sweeping through his profession.

“Public health was expanding dramatically out of infectious diseases and into chronic diseases,” he explains. “Thanks to the development of vaccines and other treatments, a lot of important common infectious diseases like tuberculosis, pertussis, diphtheria, measles, mumps, and rubella, were, if not eradicated, at least under control. Smallpox was also being controlled around the world.”

These developments influenced the course of his work. “Even though I thought I could develop a career in infection control, the opportunities, resources, and funding were mostly in chronic diseases such as cancer and heart disease, so that’s what I studied,” he says.

“Ten years later, I had some opportunities to do gerontology,” he continues, adding that his focus changed from individual chronic diseases to the range of chronic diseases that affect older people. “That’s basically what I’ve been doing ever since.”

Wallace has mentored a great number of students, helping them navigate their academic, research, and career paths.

“I’ve been fortunate to have had a lot of good students over the years,” Wallace says. “To be an academic, I think you have to be committed to teaching and growing students.”

“Dr. Wallace was patient, kind, and always generous with his advice and constructive criticism,” says Tala Al-Rousan (15MPH), a post­doctoral fellow at the University of California, San Diego. “He is one of the few mentors out there who is truly invested in mentoring a new gener­ation of scientists as they face contemporary public health challenges while reminding them of the power of scientific evidence in informing policy, advancing health, and creating change.”

“I cannot underestimate Bob’s critical role in so many aspects of my early career development,” adds James R. Cerhan (91PhD), professor of epide­miology in the Mayo Clinic College of Medicine and chair of the Department of Health Sciences Research. “Bob set me up as a broad-based researcher who kept one foot in clinical medicine/ clinical epidemiology and the other in public health/population-based epidemiology, perspec­tives that continue to serve me well.”

“It’s not possible for me to separate any aspect of my development as an epidemiologist from Bob’s influence,” echoes Elizabeth Chrischilles, CPH professor and head of epidemiology. “He has been generous sharing ideas and opportunities, provided honest feedback, and is the most positive, curious person I know.”

Looking Back – and Looking Forward

As Wallace looks back, he’s seen both successes and challenges in public health.

“There have been public health triumphs, such as reduced smoking rates, but there are a lot of conditions for which public health approaches have not been very effective, like inflammatory arthritis, mental illnesses, and a lot of cancers,” he says. “Of course, new infectious diseases have emerged, such as HIV/AIDS, Zika virus, and Ebola, that are challenging. There’s still a lot to do in commu­nicable and infectious diseases.”

Wallace is quick to acknowledge the significant contributions of many of his colleagues to his career, and is especially appreciative of Peter Isacson, who was chair of the Department of Preventive Medicine and Environmental Health and who brought him to the University of Iowa.

“I also particularly want to remember Leon Burmeister and Bill Clarke, both of whom we recently lost, and who were on the faculty when I arrived,” Wallace says.

As for the research projects Wallace is pursuing now that he has more time, several revisit a favorite subject from his undergraduate days — biology.

“I’m working with colleagues to use modern biology to try to better understand how the human immune system changes with age and how that relates to chronic diseases,” Wallace says. “I’m also interested in biodiversity and what it means to human health.”

The projects are ambitious, which doesn’t surprise Chrischilles. “Bob is always at least one step ahead of the current paradigm,” she says.

This story originally appeared in the spring 2019 issue of InSight.