UI College of Public Health alumnus John W. Colloton has been named the recipient of the UI’s Hancher-Finkbine Alumni Medallion for 2016, one of the University’s highest honors. Colloton is director emeritus of University of Iowa Hospitals and Clinics (UIHC). He earned an M.A. in Hospital and Health Administration in 1957 and dedicated more than 40 years of his professional career to UIHC. Under his leadership, UIHC developed into one of the premier academic medical centers in the world.

The Hancher-Finkbine Medallion honors those who exemplify learning, leadership, and loyalty. In acknowledging Colloton’s numerous professional accomplishments and contributions over a distinguished career, UI President J. Bruce Harreld said: “In all three of these areas, you have been and remain committed to the application of knowledge and innovation to critical social problems, and you keenly understand the major impact of health policy and the organization of health services delivery on public health.”

The medallions are named for UI alumnus William O. Finkbine and for Virgil M. Hancher, a student guest at the first award ceremony in 1964, who later served 24 years as president of the University. Seven medallions are awarded annually to four outstanding students, one professor, one staff member, and a graduate who has attained special distinction. 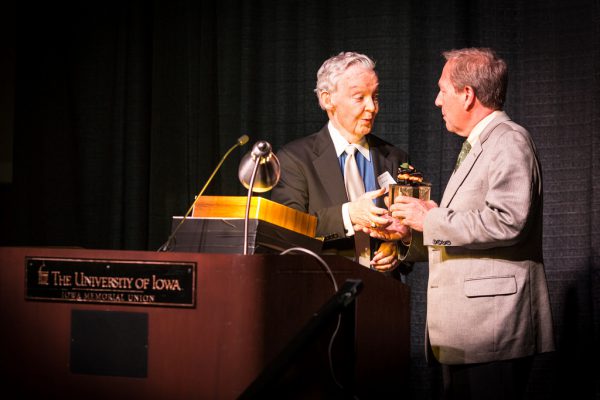