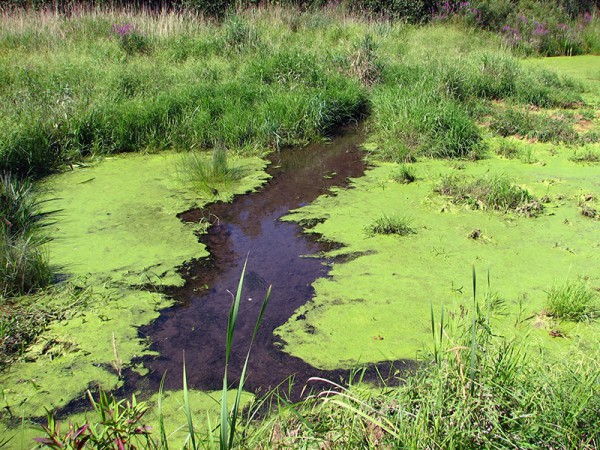 Water quality issues are making the news in Iowa and nationwide. This spring, the Des Moines Water Works announced its intention to sue three Iowa counties for polluting waterways in violation of the Federal Clean Water Act.

What are some of the concerns about Iowa’s water quality?
Since Iowa was settled in the 1840s, our water quality has suffered. This isn’t unusual for a farm state, where millions of acres of wetlands were converted into cropland. First, we’re losing lots of soil. Our rivers run brown, not clear. Even if soil loss didn’t make Iowa’s rivers run brown, they’d run green because of algae—the result of heavy doses of nutrient runoff.

So, nutrients—primarily nitrogen and phosphorus—are a second cause of impaired water quality. On farm fields, nutrients aren’t a pollutant since their purpose is to make crops grow. But in water, nutrients are out of place and become pollutants.

How does polluted water affect environmental health?
Iowa lakes and rivers increasingly have algae blooms, which reduce recreational uses and pose health risks. Phosphorus can feed blue-green algae, including a type that causes extremely toxic organisms called microcystin. In July 2014, the city of Toledo, Ohio, temporarily lost its water supply due to microcystin in Lake Erie. You couldn’t even boil the water to make it drinkable. Since 2010, the Iowa Department of Natural Resources (DNR) has seen statewide a ten-fold increase in the microcystin at beaches, from two cases to 22.

In the Gulf of Mexico, oxygen loss has created the dead zone. People often say we “poisoned” the water, but we actually over-enriched it. Since nitrogen and phosphorus make plants like corn and soybeans grow, they also make algae grow, which in turn consume all the oxygen, and fish die or leave.

Taking reduction steps is voluntary for nonpoint sources, despite accounting for 90 percent of Iowa’s nitrogen contribution, yet mandatory for the point sources.

What can be done to improve water quality through policy and practice?
In July 2014, the Iowa Policy Project (IPP) published a paper on how to improve the NRS. One of the basic problems is the lack of resources to implement the program. Besides needing to change course and assure sufficient funding, there are other problems with a voluntary program. There’s no date by which to achieve the 45 percent reduction goal; we need to set a date. Also, monitoring isn’t required, and should be.

But the crux of the NRS weakness is that it’s voluntary for farmers. Many farmers are doing positive things. But many farmers aren’t doing anything and should. An ISU Agriculture and Rural Life poll in 2011 of 1,300 farmers found that 51 percent of landowners spent nothing on conservation practices in the prior 10 years. If you’re spending nothing, you’re likely doing nothing. IPP thinks farmers should be required to pick two conservation practices from several choices.

What practices help reduce soil and nutrient loss?
One effective practice is cover crops, which keeps soil in place and utilizes nitrogen and phosphorus. However, they can be hard to get started if row crops aren’t harvested until November. Buffer zones between crops and waterways are very effective. The Environmental Working Group showed that a relatively small number of acres taken from production can help. Buffer zones attract wildlife such as pheasants. Farmers could charge people to hunt on their land. Other practices include reintroducing wetlands, contour farming and terracing, and grassed waterways.

If the NRS is sufficiently funded, more technicians could be hired to help farmers successfully adopt these practices. In Iowa, we have the best farmland in the world. We ought to use it to grow corn, but we should be able to grow crops and not contaminate the land and water.

This story originally appeared in the spring 2015 issue InSight magazine for alumni and friends of the UI College of Public Health.