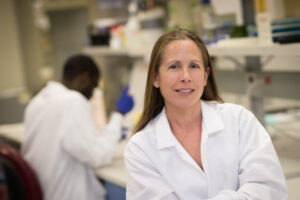 Sharing a sanitation facility between households can be linked to increased risk of moderate-to-severe diarrhea (MSD) in children under 5 years of age at some sites, according to Global Enteric Multicenter Study (GEMS) study findings published this week in PLOS Medicine. The study, conducted by Kelly Baker, assistant professor of occupational and environmental health at the University of Iowa College of Public Health, and colleagues, suggests that access to private sanitation facilities should remain a global health priority.

Diarrhea kills about three-quarters of a million young children every year. Interventions to improve sanitation and hygiene may benefit the roughly 2.5 billion people who do not use improved sanitation, including the 1 billion who defecate in the open. GEMS is a case-control study of pediatric diarrhea in children under 5 years of age at seven sites in Africa and South Asia. This study compared 8,592 children under 5 y with clinically and laboratory confirmed MSD matched to 12,390 asymptomatic children to uncover associations between household sanitation and incidence of diarrhea.

As the study is observational, confounding by related characteristics such as hand washing may limit interpretation of results. In a linked Perspective, Jonny Crocker and Jamie Bartram of University of North Carolina at Chapel Hill, United States, discuss study limitations but argue that “Baker and colleagues present the best dataset yet on diarrheal disease associated with sanitation and hygiene. They provide compelling evidence on sanitation and hygiene risk factors for MSD and variability in that risk.” (originally published on EurekAlert!)

Gender disparities in water, sanitation, and global health (The Lancet)