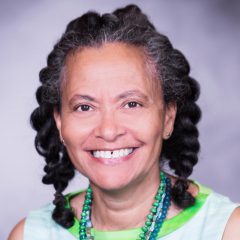 Dr. Camara Jones is a family physician and epidemiologist whose work focuses on the impacts of racism on the health and well-being of the nation.  She seeks to broaden the national health debate to include not only universal access to high quality health care, but also attention to the social determinants of health (including poverty) and the social determinants of equity (including racism).

As a methodologist, she has developed new ways for comparing full distributions of data (rather than means or proportions) in order to investigate population-level risk factors and propose population-level interventions. As a social epidemiologist, her work on race-associated differences in health outcomes goes beyond documenting those differences to vigorously investigating the structural causes of the differences. As a teacher, her allegories on race and racism illuminate topics that are otherwise difficult for many Americans to understand or discuss.

Dr. Jones received a BA degree in molecular biology from Wellesley College, an MD from the Stanford University School of Medicine, and both an MPH and a PhD (epidemiology) degrees from the Johns Hopkins School of Hygiene and Public Health.

She is the immediate past-president of the American Public Health Association and a Fellow in the American College of Epidemiology.